What is in walking distance

Three beaches and open public pool are in close walking distance to you. You can use Pizana beach, Richard beach, both next to the Old town, or beautiful Mogren beach. Our pick is Mogren, for cleanest water, best sand, good coffee and great cliffs to test your courage.

All four spots are ideal for early morning or late evening swim to fill lungs with clean sea air. If you want to see underwater world, we can lend you masks – Mogren has great sea life. More about Budva beaches you can read HERE.

There are few spots we can recommend, where you can meet us often, but also try to explore more places, through tripadvisor reviews, or advices from locals.
About restaurants, you can read separate post HERE.

Mogren cafe is place where old locals like to sit for decades. Great food, great cakes, good coffee – our pick for snack is pizza sticks. Newly renovated it is best pick. Inside you can find express restaurant for great meal for reasonable prices.

Mozart cafe, on the right side of the main Old town door has the best sugar treats around. Great breakfast spot also.

Casper bar is open bar inside Old town owned by locals. It is place for you if you like to chill – both in the morning and evening. They have great domestic rakija – montenegrin brandy made from grapes. Must have.

Hemigway bar: Ernest Hemingway was known for his fondness for a tipple or two, so it is no surprise to hear that the bar takes his name in Budva is a fine choice for a night out. Some of the best cocktails in the city are found at this spot near the old town so if you’re after colourful concoctions then you know where to go. It can get very busy in the summer evenings so a reservation is a good idea — it is definitely worth it. 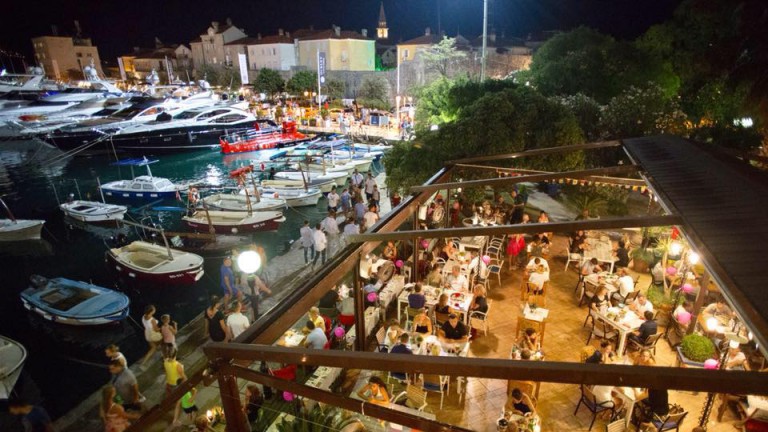 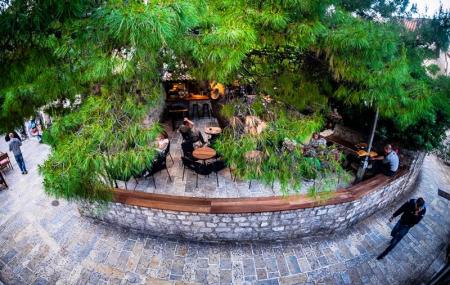 The Ancient Necropolis of Budva – During the digging of the foundations for the hotel “Avala” between 1936 and 1938, several graves from the Hellenic and Roman periods were discovered, together with a lot of precious materials – especially gold and silver jewellery, different dishes, glassware, ceramics, and weapons.

The City Museum of Budva, located in an early 19th century building, has a permanent exhibition of its archaeological and ethnographic collections, while the ground floor of the museum boasts a lapidariumfeaturing valuable stone exhibits. The archaeological collection includes the many objects discovered during archaeological excavations in Budva (Hellenic gold, different types of vases, jewellery, ornaments, tools, and cutlery, glass and clay objects, silver dishes…) of various sites dating back to the 5th century BC, which combine the cultures of the Greeks, Romans, Byzantines and Slavs in this region. Especially valuable are a pair of gold earrings and a brooch with an engraving of an eagle with a little boy in his claws, which is associated with the Greek myth of Zeus and Ganymede. The ethnographic collection includes a large number of exhibits from this region,dated between the 18th and early 20th centuries. The archaeological collection boasts over 1,200 relics and the ethnological collection of more than 450 different exhibits.

The Citadela Budva – In the southern part of the town, at its highest point, the town fortress of Kastel was built, which is now known as the Citadela. The town walls start and end at this point. The fortress was mentioned for the first time in ancient chronicles in 1425. For some time, it was the seat of the Metropolitan of Zeta, after he left his original base of Prevlaka. 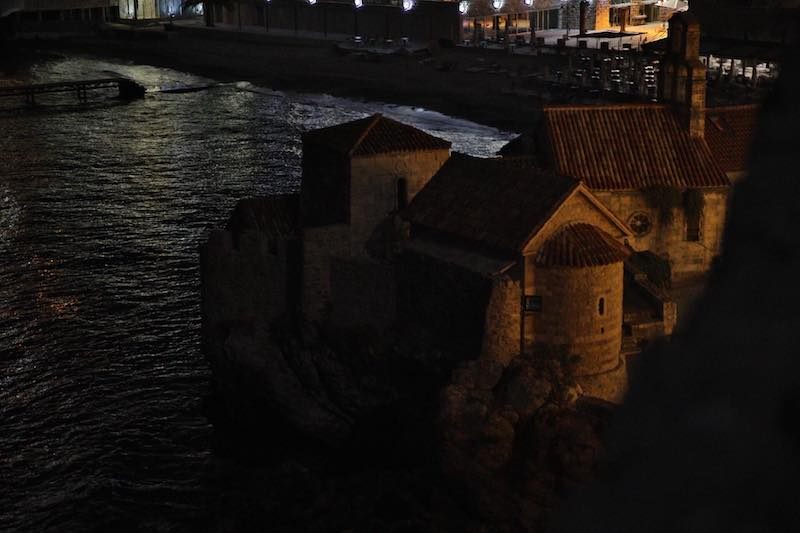 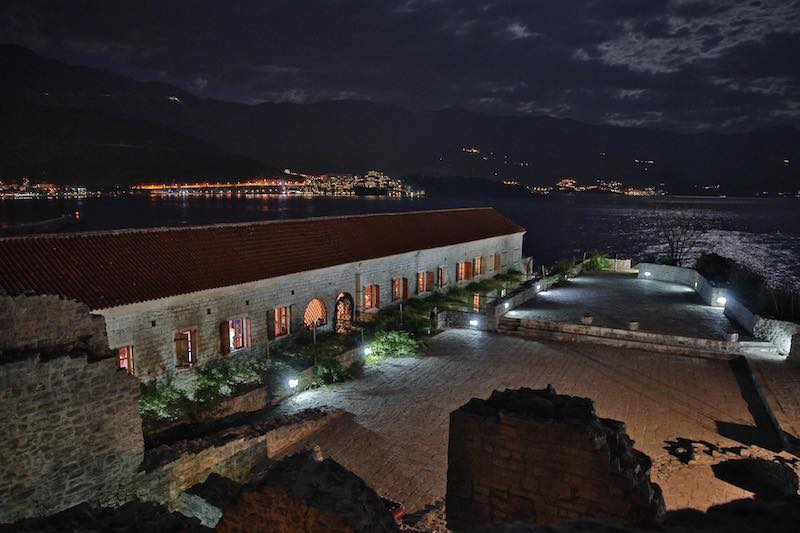 The Town Walls of Budva is a unique architectural and urban unity surrounded by mediaeval walls, which existed in the 9th century. One wall of a Benedictine monastery built in 840AD (now the Church Santa Maria in Punta) was built as protection from the sea. According to the oldest known drawing of old Budva from the 16th century, the town was surrounded by its wall and six towers, including two tall and one round tower. These town walls and the towers were destroyed in the great earthquake of 1667, while the new walls were built on the foundations of the old ones.

The Modern Gallery in the Old Town was opened in 1972, with an exhibition entitled “Modern Expressionists,” which displayed the works of the best contemporary expressionist artists from Yugoslavia and the rest of the world, for the first time in any Yugoslav Art Gallery. In over forty years since its opening, the Gallery has organized both independent and collective exhibitions of the greatest artists from Montenegro and the former Yugoslavia. It boasts a total of 218 drawings, aquarelles, engravings and sculptures, the best-known being the collection of Contemporary Expressionists.

The Church of Sveti Ivan is one of the oldest churches in the coastal region, which wasbuilt, according to oral tradition, in the 7th century. It was a Cathedral until 1828, when the Diocese of Budva was abolished. The Cathedral was damaged in the earthquake of 1667, after which it was reconstructed on several occasions, while its high tower, which dominates the town, was built in 1867. Next to the church is the former Bishop’s court complex. 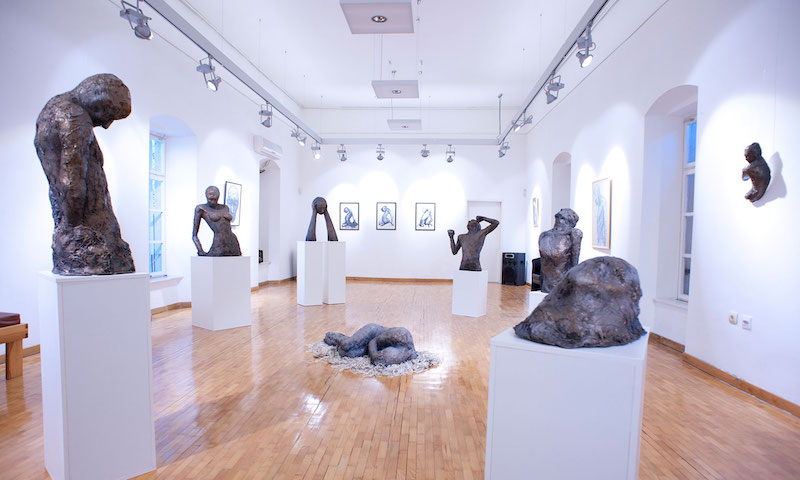 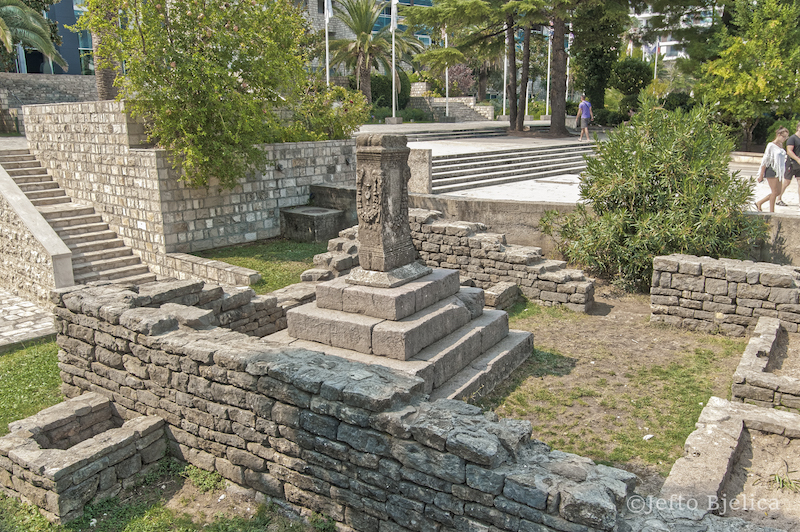